Some of University students settled at their work, and did not want to continue their studies in the University. They decided to get their degree from the Distance (Correspondence) Education. Most of them continued their studies at the University and at the same time they were also working at their jobs. They did not want to quit their job. They had salaries and could pay their school fees by themselves. They did not depend on their parents any more. These three years changed their life so much. 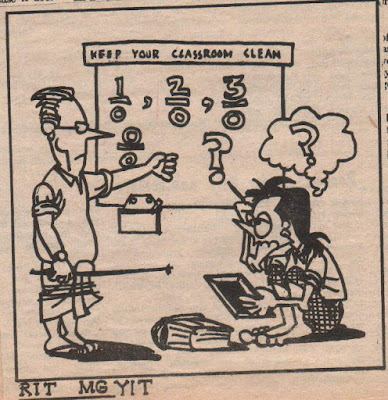 (My brother took lessons from our father. ‘What would be the next?’) (Illustrated by Maung Yit)

We continued our studies when the Universities reopened. I was now attending the Master classes at R.A.S.U, and my brother, R.I.T (Rangoon Institute of Technology). Father became our Mathematics teacher. Mathematics belonged in all the engineering subjects. My bro could not follow all the subjects without the knowledge of Mathematics. So, father’s teaching helped his texts, and for the examination.

As for me, I still met the different opinions between the teacher teachings, and my father’s. The basic mathematical theories from my father could not be fixed with the teacher’s teaching. I studied from the basic theories from my father, and try to understand the problems taught at the University. I did not miss all the classes at school, and I studied line by line thoroughly. I asked every part in detail to my father. Father explained with his basic theories, so I studied with new texts, and notebooks. However it was difficult, and hard, I was happy to do with mathematical problems. I could calculate when I met in the daily life by the basic method of my father’s training. 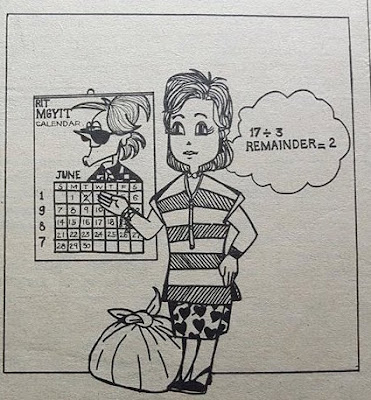 (I marked by a cross on the day at the calendar on which the washerwoman comes by dividing by three the number representing the day of the month as a daughter of the mathematician.) (Illustrated by Maung Yit)