My first step of Honors student in the University of Rangoon in 1988 was mixed with joy and disturbances. Universities were not fully calm because of student riots. We could not attend the classes comfortably. But on the other hand, I was quite happy my University life. Going around with friends the University campus I would never forget in my life.

My twin brother was already a cartoonist. Since he was a child, he wrote cartoons at his notes, and created the stories. I also mimicked his drawing. He began posted his cartoons on the cartoon box at R.I .T (Rangoon Institute of Technology), and was known among R.I.T students. He had a pen name, Maung Yit. I envied him, and I wanted to be a cartoonist like him. But my drawings were bad, and awful. The family applauded his cartoons, and I thought he became smarter, and smarter. Grandma let him drew for her articles, and father also asked his help to draw for his too. He was one of the important members in the family.

(Our father wrote a story, and my brother participated by his drawings. He became one of the characters that father created. “Mathematician and Maung Yit”. ‘Is it reasonable?’ asked he to mathematician.)

What I was doing at that time? I only became an Honor student (no more, or no less!), by learning by heart the problems, and solutions without understand them. Although I got 2 distinctions in Mathematics in second year, and now was allowed to attend the Honors classes, I still was troubled with Physics, and Chemistry. Even though I became interested in Mathematics, and was happy to do the mathematical problems, I could not fully understand the problems on Physics, and Chemistry well. Minor subjects still bothered me. I still could not memorize rapidly their theories, and axioms. I came to realize that I was just a stupid girl although I became an Honor student. 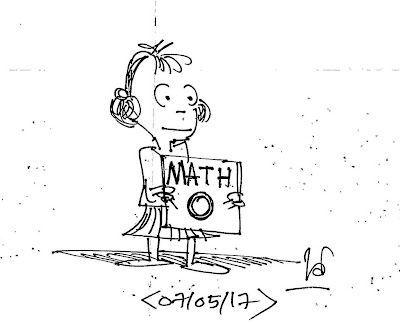 (Who cares! I never wondered why I was stupid. My father got an idea to write an article ‘The Taming of a mathematician’ because of me. He should thank me, isn’t it?) (Illustrated by Maung Yit)

I still heard someone said about me when I failed the 8th standard (my eighth-grade),

‘The twins are different. The boy is sweet, and smart, like a prince although his little twin sister is ugly, and dark like a crow. She is stupid at school, and always gave disappointment to her family. It’s strange!’

I told my brother what I heard. My brother said, ‘You are not ugly, my dear sis. The important thing is you are different from other pretty girls.’ I was so proud for what he said. I did not know it was the same. 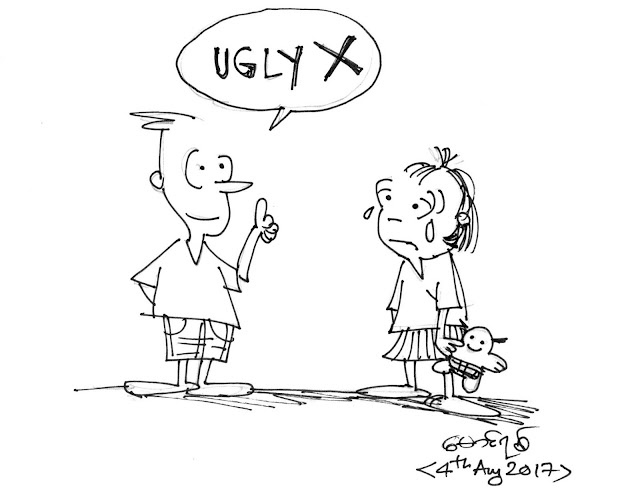 (‘You be more careful with your teddy bear, it makes your nose flat. But ‘ugly’ does not sound ‘not beautiful’. You are different. It means you have something that other pretty girls did not have. Ok!’.) (Illustrated by Maung Yit.)

I remembered my father called me ‘Yoke Soe Lay’ (It means ‘Ugly Little’). (He called me even when I was at the University.) He called that ugly name among people. When they heard it, ‘Oh! Sir, your daughter is not ugly. She is quite beautiful except her nose is as flat as a blackboard. Was she born nose flat?’ My mother quickly replied, ‘No, no. Her nose was like her brother when she was born. It is because,…. Er … she always push her nose with her teddy bear so much since she was a child. That’s why her nose became flat…’. But they did not stop, ‘Ah! That’s why! Oh! What a release! … her nose had two holes!’ My mother said when they left, ‘They are fools, because without two holes in a nose, how could she breathe.’ 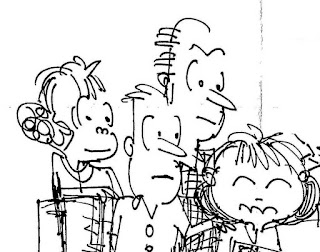 (‘They are fools, my dear. Do not listen their words. You are beautiful although your nose is flat,..er…. we mean it does not like your brother… er…’)

Universities and Institutes did not stay peaceful in the meanwhile. Some University students were eager to join the student riots. They attended the meeting, and listened to the speeches. The attack of the military on the University students aroused the anger of the whole Universities. Flyers were everywhere including in the toilets. Student riots led to the country riots (8888 uprising), and the resulting economic disturbances became a serious matter in the political changes. One day, I looked at the mirror, and saw a selfish University girl who was just a coward among the patriotic students.