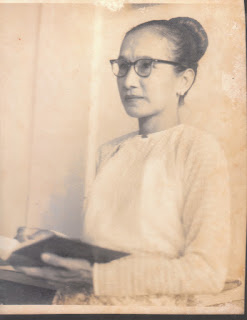 However they were not Buddhists, they did meditation at the monastery if they had time, and travelled together all around Burma. They admired our country, and said that we are lucky to be born in Burma, and born as Buddhist as well. Grandma, and grandpa welcomed them warmly. My grandparents were always ready to help whatever they asked. 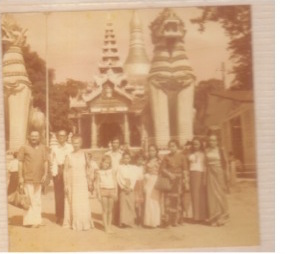 (Non-Burmese friends and their family with us at Shwedagon Pagoda.)

Among those things, one of her friends was going to write a book about Yauk-Kaw catalogue. Grandma was helping with her heart. They two went to Yauk-Kaw many times for the book. The family sometimes accompanied with them, and enjoyed the trip. I remembered her name was Mrs. Erica Drucker (her Burmese name was Khin San Win). According to her book, the time was during October 1979 to June 1980. They especially went to the York-Kaw monastery, and met a venerable monk Sayadaw U Dhamma Theib-di who welcomed them with full interest, and gave best support. The photographs for the book were taken by Mr. David Drucker. 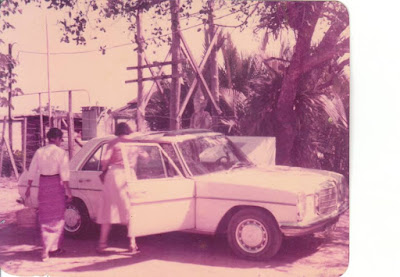 (This photo I picked from the album, might be at York-Kaw.)

York-Kaw was a small town situated at the other side of Rangoon river, and six miles distance from Rangoon. About 2 hours taking by car to get the river bank, and continued by ship for an hour (I think!) to reach York-Kaw. It was a tiring trip for visitors. The York-Kaw road was rigid, and tough. There were rocks, and stones added on the way. It gave our stomach aching. I saw they did not care the difficulties they met, and both were anxious for their work alone. 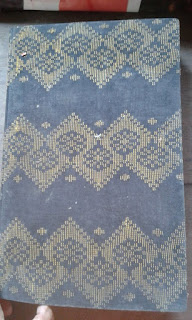 Mrs. Erica Drucker was collecting, and researching the history and context of the Museum collection, and making a complete Burmese and English inventory of all the Museum holdings. Grandma was busy when she came, and they were discussing about the book. The finished book was typewriting, and photos were stick to each page. The large, long and heavy book with full collections, and classifications of all the items they had researched. The book was complete, enormous, and perfect catalogue I had never seen in my life before. No computer, no scanner, no digital, or without the hand of the age of technology, it comes out to public admirably. 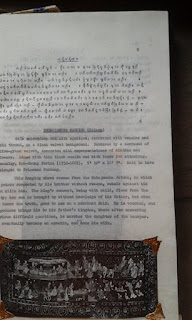 (An example of one of those pages, their hard work was seen.)

At that time, I was only a kid, and I did know nothing. I only saw grandma and her non-Burmese friend were busy together. I see finding a friend of similar spirit, and interest is always a joy.

When I was preparing a book about my grandparents in 2014, and collecting materials, gathering facts, and searching old photos, I found the book that I recognized existed for long time ago. My mind was going back to 1980, and I recalled their old memories. 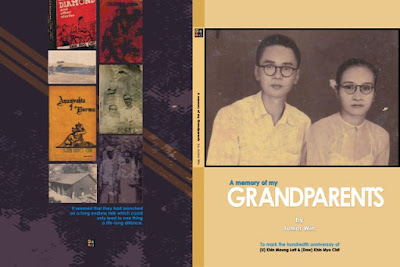