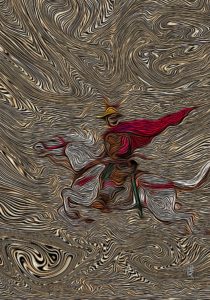 Fire …. … Fire
The camp fires of the British forces seemed far away now.What happened? thought Maha Bandoola. Surely, it must be a dream …..it must be….what else could it be ?

And so, according to History , Dark Ages set in. Sometimes, even in the Dark Ages,there were some flashes of light , which for one moment seemed to enlighten some parts of the world, only to vanish again.

The Saxons were attacking Britain. No one could stop the invasion.Not even King Arthur. But that didn’t stop him from trying.Legend says that King Arthur had won more than one fifty battles against the invading Saxons. However ,the cause was already lost. He remembered his oath, ”May I always fight for lost causes.”

The last battle , it was the greatest and the bloodiest. He saw the invaders coming from all sides. Bo Thura was with him.

”May I too fight for the same cause as my brother.”

If you look under the name ‘Arthur’ in the encyclopedia you will find the sentence, ‘A Briton king who halted the Saxon invasion for a time.’

That’s the kind of recognition you get for fighting for lost causes.

A distant sound of gun fire brought Maha Bandoola to the present. He felt as if he had just come back from the past. Surely, it’s impossible to go back to the past except in science fictions, he thought.

”May I always fight for lost causes.”He didn’t remember praying that he might win. But of course , lost causes are to be fought, not won. If they are won, they won’t be lost causes.

He remembered closing hls eyes for one brief moment then opening again. He was on a hill.

No, he could not be. Surely, it must be another dream.The arrows of the Norman bowmen were pouring down upon them like rain. King Harold the last of the Saxon kings was defending his land against the invading Normans.

Another lost cause. Bo Thura was with him, only, this time the name was different,  something like Albert.