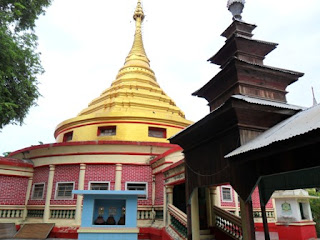 Myingyan, situated in Upper Burma, where the tomb of Sunlun Sayadaw U Kavi whose body still lay as on the day he died more than sixty years ago. I had a plan to visit there joining the group of Venerable Sayadaw; U Wara းwho was a head of Kaba Aye Sunlun Gu Kyanug Meditaion Centre (7thmile, Rangoon), also meditation master. This year, Sayadaw welcomed any Sunlun yogis (People who followed Sunlun way of meditaion) who loved to join his group to visit Myingyan.

The time I would visit there, was in rainy season. This August 2013 met very heavy rains and darky clouds especially in lower Burma. Including the city of Rangoon and the area near Irrawaddy River met tremendous rains and muddy, slippery roads. My mother was worried about me travelling in this difficult weather. I too, was afraid to go outside. I was told that there were about one hundred and more Sunlun yogis joined the group to visit Myingyan. I was accompanied with my uncle and my aunt. There was only 3 days trip. Two days sleep in the car and spend the day there.

My grandmother, Khin Myo Chit (writer of ‘A Buddhist Pilgrim’s Progress’ in 1955) wrote about her experience visiting Myingyan as ‘Once we dropped in at Myinchan the home town of the Sayadaw a few months after his death. His body had remained undecomposed though lain uncoffined. We went to the place where his body lay in state only because our friends felt that we should not miss one the high lights of the town.’ I had never been there before. I read again those lines with excitement, and again and again recited, fear to forget old memories of my grandparents. Now, I would be there where my grandparents treaded once.

I collected information about Myingyan before I travelled. I knew my uncle and my aunt had already been there with the meditation group, and they already had wonderful experiences. I asked them about the visit, and wrote down what they told. I also viewed the photos they had taken when they visited there. I looked at all their photos very carefully. Because of the digital technology, I could learn what time they had taken those photos or what they perceived at the Sunlun monastery. I was told that the visitors were allowed to pay respect Sunlun Sayadaw (Myingyan) whose body lay on the Holy Throne inside the case which was covered with glasses. People only watched and paid respect from outside the glass-door. The door always closed.

Especially only Sunlun Yogis who joined the Venerable Sayadaw U Wara’s group were allowed to pay respect Sunlun Sayadaw freely, authorized by Sayadaw U Wara who had a glass door opened on that day. I did not know I would have the same chance when I arrived there. I heard that there were about a hundred yogis or more joined Sayadaw’s group.

I bought yellow robes, towels, incense sticks, and candles, planned to offer at the monastery of Myingyan Sunlun Sayadaw. Buddhists could offer not only yellow robes but also umbrellas, foot-wares, or towels, etc which might be useful for monks. I could offer yellow robes there on behalf of my parents and my brother who could not come with me. So I would perform deeds of merit for my family although they were not there. The same merit that they would have gained although they could not do by their own hands.It is the custom of Buddhists to say ‘Ah-mhya’ three times meaning ‘Come and share’, whenever they do a deed of merit, and it is expected of those who hear it to say ‘Tha-du’ three times meaning ‘Well done’. If my family would say ‘Well done’ three times; expression of joy and appreciation at some good deed by others, and when said either mentally or orally, it is in itself a deed of merit. 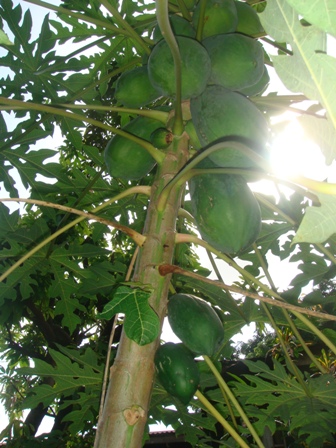 When I saw papayas, custard apples, and citrons which beautifully blossomed in my garden, I wanted to bring them with me when I went to Myingyan. I thought offering our own fruits at the foot of the pagoda or at the monastery, was also the act of dhanna, or giving, an important aspect of Buddhist teaching. I heard my grandmother used to say as ‘to go to the pagoda is to rejoice: to rejoice in the good deeds of others and in one’s own good fortune to be able to do good deeds’. So, my little piece of rejoice of my dhanna will give rejoicing to others, I hope.

My mind became fresh and different with the thought of my coming visit. I felt so excited and was thinking of my grandparents who passed away more than ten years ago. Coincidently on the day I would be at Myingyan, was the day my grandfather passed away 17 years ago. So, I would have to offer yellow robes for my grandparents, hoping that they would see my deeds of merit from heaven, and say ‘Well done’ with me.

We would go there by car on a cool, rainy evening. My aunt would come and fetch me to the bus station. We would be at Myingyan next early morning. I was excited, and hoped my trip would go well and safe.