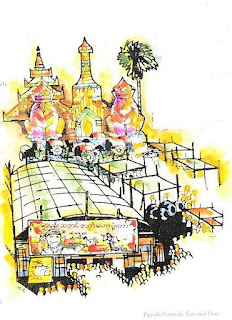 A Letter to my Grandmother

‘One of the highlights of the season in Rangoon is the Shwedagon Pagoda festival celebrated on the grounds around the hill where stands the great pagoda.’ heard from you, grandma, long ago. Today 2600th anniversary of Shwedagon Pagoda would be held in Rangoon until 7th
march of 2012. It was begun its celebration since two weeks ago. I hoped to see the grounds filled with rows of bamboo and thatch huts which were marked stalls or show rooms. I also hoped to taste Burmese foods and I also wanted to window-shop on the products from all over the country, from the arid plains of central Burma, northern hill tract, lowlands and the delta areas of the south.

You told me, grandma, ‘there were baskets, mats, trays and boxes made of cane or bamboo or palm leaves, cotton wool quilts, fillings for cushion and mattresses, cotton rugs, bags and handwoven textiles in colourful patterns; paper mache dolls, some of them grotesque yet attractive: glazed earthern-wares, pots, vases, ash trays; lacquer-ware useful as well as beautiful on the every corners of the pagoda ground.’ I still heard what you once said to me that ‘it was a wonderland where you may wandered and browsed for hours and come away finally laden with beautiful things, most of them useless.’ Oh! I could not wait for that experience, grandma.

I had a little chance since I was born to see such a wonderland, grandma. I had only heard from you and my parents how wonderful and colorful the Shwedagon Pagoda festival was when we were too young to understand. So, the last month of the Burmese calendar falls in March, it was a month of Shwedagon pagoda festival. But there had not been Shwedagon Pagoda festival for 30 or 40 years. Now 2600th anniversary of Shwedagon Pagoda was held this year, it was a very great chance for me. I did not want to miss it. Yes, you said ‘it was impossible to miss the pagoda festival!’
If you were still with us today, surely you would ask me to buy some Burmese foods from the festival for you, isn’t it, grandma? You surely asked me to buy some beautiful things all over the country, from the arid plains of central Burma, northern hill tract, lowlands and the delta areas of the south. I also loved lacquer-wares and earthern-wares. I liked to buy some hand-made things as bags, dolls or boxes. Surely I would bring them home, grandma. I hoped to wonder and browse for hours as you did in your days, grandma.

I really hope walking through the never-ending gastronomical paradise, I longed to smell the air with heavy aroma of frying, I would love to taste grand carnival of crispies and pan-cakes, YES! I remembered you said the most popular is the grand crispies! I did not want to miss to taste stalls with mountainous heaps of wafers made of glutinous rice flour, paper thin and light as air and very brittle. I would love to buy them in bunches of fives or tens, strung on bamboo strips. They were crunchy and munchable. Surely I would enjoy them ‘showering white flakes on myself and my fellow beings as I chew and jostle my way through the crowd.’ Oh! What a great chance I have had now!

I remembered you told me that ‘there were crispies and snacks were a plenty on the festival grounds!’ I was excited to go there, grandma. I did not know yet what I would see in the festival ground. I am surely to go there, grandma. You said ‘It was impossible to miss the pagoda festival’. I do not know yet it is the same wonderland as in your days, grandma. It is impossible to miss it, isn’t it, my dear grandma?

I promised you, grandma, surely I will go and see……and…..I will write an article about it…….the reader must envy me for my luckiest moment
of wandering through the wonderland…..like what you wrote in your book….I will write an article about my experience of….….like what you wrote in your article…..grandma…..I promise….one day……

(picture by maungyit, who drew for my grandma(KhinMyoChit)’s book; ‘Flowers and Festivals round the Burmese Year, illustrated for Shwedagon Pagoda festival of our grandparents’ days.)