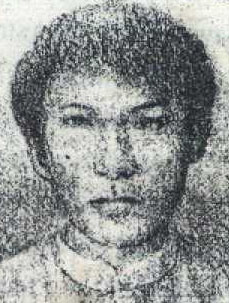 Interview with the family members of dead student by fellow students for their student union newsletter –  (from “Sethmu Ahman” newsletters, issue (4), 17.9.1988)

We, the editor team of ‘Sethmu Ahman’ newsletter, were able  to have an exclusive interview with  a family member and close friends of Ko Phone Maw, a fifth year chemical engineering student. His life was takne in March students’ demonstration, which occurred in the compound of Rangoon Institute of Technology (RIT). The interviewees include Mar Mar Win, elder sister of Phone Maw, and Khin Maung Htun (BSc.History), Win Win Myint (BSc.Physics), and Min Htut, a third year zoology student, who all are  friends of Phone Maw. The following are their original words and feelings.

Firstly, we inquired about his family’s private affairs. Mar Mar Win answered that his parents are U Aubar and Daw Amar (both deceased), and Phone Maw is the fourth son among the five of his siblings. She added that the eldest brother Kyaw Win, the other elder sister Mar Mar Ei, and herself opened a sale shop in Mingalar market to make a living for their family. The parents took care of Phone Maw and the youngest sister Ni Ni Aung, a 2nd year chemistry student in the then Rangoon University( Hlaing Campus).

About Phone Maw’s death, Mar Mar Win explained that her family did not learn of his death immediately on 13.3.88, the very day that tragedy happened. They only heard the news over the radio at 1:00 in the afternoon of 14.3.88, while they were in the market. His younger sister got the news from the university where she was studying.

END_OF_DOCUMENT_TOKEN_TO_BE_REPLACED 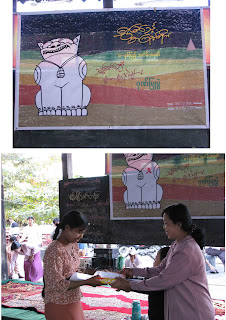 Contributed by A Reader from Rangoon

The following information is about Shwechinthae Social Service Group, a charity organization opened at Shwechinthae monastery in Shwe Bo city in Sagaing division. After thoroughly reading the organization’s papers and records, asking patients and volunteers, I wrote this article mainly focusing on itself and its activities without mentioning the names of present activists of its.

Shwechinthae library was opened on 18.12.2000. Members of library who were graduates, but had no occupation, launched a free teaching program for 10th standard students who cannot afford schooling.

END_OF_DOCUMENT_TOKEN_TO_BE_REPLACED

Our first meeting was in the union of graduate old students which was born in Rangoon University. Mya Aye was actively involved in 8888 people’s uprising. Then, a place on Maung Htaw Lay street became a rallying point for our association which we called ‘GODSA’. After that, we met again together in cell block 5 of Insein prison in April, 1990.

END_OF_DOCUMENT_TOKEN_TO_BE_REPLACED

Delaying the parliament’s schedule, the present military government is speeding up its moves, to sell country’s natural resources and to give its cronies lucrative contracts to manage state-owned properties, at the same time.

It has been seen that not only the passenger buses, but also the luxurious cars like ‘Mark Two’, join the business of queuing up for petrol at the private stations for hours and reselling it on black market, to earn extra money of 10000 kyat.

The junta does not try to formulate the effective economic policies – letting private enterprises do business freely – to control the consumer goods prices, nor to enforce essential laws so as to be competitive in the market. Thus it is likely to cause inflation and social crises after junta’s plan to raise salaries.