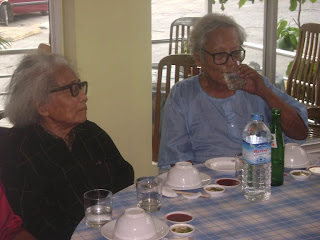 In Rangoon, Burmese activists, NLD members, community from Burmese political and literary circles were hosting birthday ceremonies to pay respect to 2 senior opposition leaders, U Tin Oo – 83 and U Win Tin – 80. In the photo of that day, U Win Tin seen with Dagon Taya, one of the great and most senior writer from the Burmese literature community (on the left).